Marching Band Simulator is a game where you take control of a marching band. In the current release, you are given 52 marchers playing instruments such as trombone, tuba, trumpet, saxophone, flute, clarinet, snare drum, and bass drum.

The volume of each instrument can be controlled using the buttons on the right side of the screen.

There are four selectable songs that your band can play by pressing the note icon.

Thanks to everyone who has donated to this little proof of concept that I created almost a decade ago.  Apparently, it is still popular, so it will be next on my list to update and modernize.  I've learned a lot with Unity since I created this project, so I think I could do a lot to make it more impressive and be more like what I had originally envisioned for the simulation.  I played in marching band in highschool, so I do have some insight on what goes on in marching band programs.  Some things I would like to add are more formations, color guard with flags, over all more frills, an instrument tutorial mode, specific stats for each marcher (playing ability, marching, etc), more customizations with uniforms.  Again, thanks to everyone who has played, downloaded, and supported this little marching band simulation. 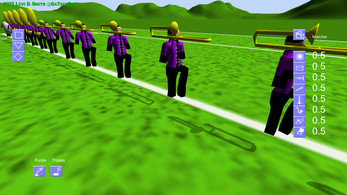 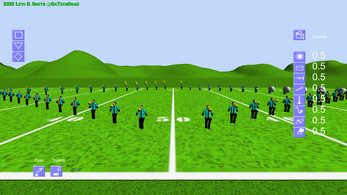 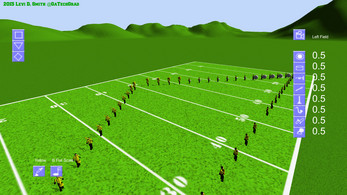